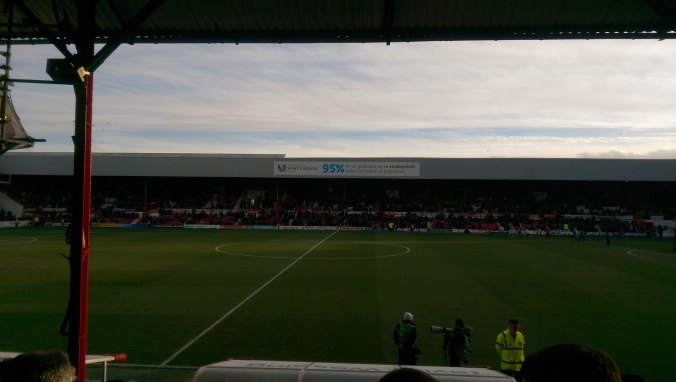 …It’s pretty cramped inside the New Road stand, and I don’t mean that as an insult at all.  It feels – for want of a better word – like a proper stand.  Once kick-off approaches it seems to teem with humanity, and as me and Nathan stood and chatted over a burger (me) and a hot dog (him) you start to feel like you’re a little bit swept up in a tide of fans, having to lean this way and that to let anyone through.  And here comes the only real issue I found with Griffin Park:  If you buy some food and want sauce on it, you’ve got to walk about ten metres away from the concession stand to be able to apply condiments, then walk back again.  Easy if the place was empty, a bit trickier when it’s so full.

Nathan would have more walking to do because at half time he was needed to do an interview with the official Brentford website and media partner, but in the Braemar Road Stand.  That involved walking all the way around the ground rather than just nipping across the pitch or around the touchline, then doing the same to get back for the second half.  I hoped for his sake that the second period of this game wouldn’t start as quickly as it did at West Brom last week.

With about five minutes to go before the game began, I bid my farewells to Nathan and wished him luck for the game.  I then found my seat, and found myself in the midst of a lot of chaps – most older than me – who all seemed to know each other pretty well.  I guess this is a consequence of buying someone else’s season ticket seat for the day.

The first thing I noticed – apart from the lack of elbow room compared to newer stadiums, but you don’t mind being packed in on a cold day – is that the dugouts were right in front of us.  I appreciate that if you sit near the halfway line that you might be near to them, but the nature of Griffin Park being so close to the pitch meant that you really feel like you’re right on top of them.  I looked forward to seeing the notably volatile Rotherham boss Steve Evans up close during the game.

Most of my favourite football stadiums are in London, where being close to the pitch is more common and space is at a premium.  I love Upton Park, White Hart Lane, Brisbane Road, I did love Highbury and now I love Griffin Park.  With the place pretty much full it instantly reminded me of watching football as a kid, from the terraced Ealing Road End to the two-tiered standing and sitting Brook Road Stand, where the away fans are put.  I’ve since learned that this end is called “The Wendy House” by some fans, and it’s the most accurate nickname I’ve heard for quite some time….

…My main footballing memory of Middlesbrough FC harks back to the late 1990s and their fine side that Leicester somehow beat over a replay in the 1997 League Cup final.  That team had two of the best players I’ve ever seen play in their starting eleven:  The diminutive genius that was Juninho (who still looks like a twelve year old) and the “White Feather” himself, Italian striker and Just For Men refuser Fabrizio Ravanelli.  They were terrifying to see in full flight, and the rest of the side wasn’t too bad either, with current Leicester boss Nigel Pearson in their back four.

I went to both of those final games.  We massively got out of jail in the first game thanks to Emile Heskey (I won’t hear a bad word about that lad. Scored loads for us, made us a load of money and then when we went bust helped out. He’s a proper legend. And the same school year as me, so had him destroy me at Sunday League football as a kid), and then in the replay I popped to the loo and heard a massive cheer as Ravanelli had a goal disallowed.  My shoes were splashed.

I’d not been to the Riverside since that era though, sat high up in the away end on a very cold winters day.  Now was my time to return, with a gig in Scarborough on the Saturday night I had an excuse to go along.  Also, with Brentford as the opponents it would be nice to check out a game with two sides playing good passing football in the Championship.

That’s not my sole reason for going to the Riverside though.  As a former BBC employee I know when you’re meant to declare a personal interest in a story, so here is mine:  Middlesbrough are owned by Steve Gibson, a man that most football fans look at and think “I wouldn’t mind him owning my club”.  And for good reason:  He’s been super generous as a chairman, helping Middlesbrough to great heights during his tenure.  He’s a local lad, owning the club he loves rather than choosing one to turn a profit.  And best of all, he once wrote to a chap who applied for the vacant manager’s job with his Football Manager CV by politely turning him down because his record said he was over-qualified. Brilliant…