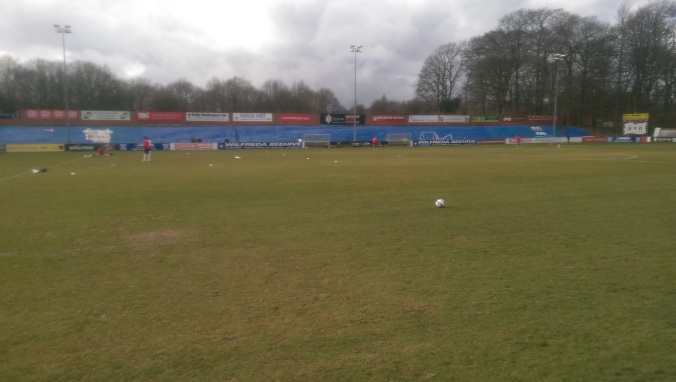 …That last thought worried us a fair bit, especially as we were pretty vocal in our disappointment regarding the performance of the burly number nine.  That said, he was so poor that you’d imagine that even if his Dad was stood next to us that he’d agree with us.  And I must stress we weren’t being mean; the other fans around us were as annoyed with him as we were.  We wanted him to be an all-conquering action hero, what we got was a lad off of Geordie Shore.

It took a couple of minutes for someone to update the scoreboard, a disinterested steward getting the job.  He slowly put up a number one for the away team.  Poor bloke didn’t know at this point how busy he would end up being that afternoon.  We could hear him sighing as just as he had finished and walked away from the scoreboard, Sheffield got an equaliser through Gregory.

We wondered how many numbers they had by the scoreboard in case of an abnormal score, and then chatted about the good old days of the videprinter on Grandstand and how you’d get a massive score every now and again, spelled out in capital letters as well as numbers.  I remember watching that at my Gran’s house as a kid, her second husband vocalising how I’d then see it for the rest of my life.  He was checking his pools coupon and a score came in from the Scottish second division – I forget what team so let’s say Hamilton – had scored 8. As I read the word “EIGHT” he shouted “FUCKING EIGHT??!!”  I can only read scores like that in that way nowadays….