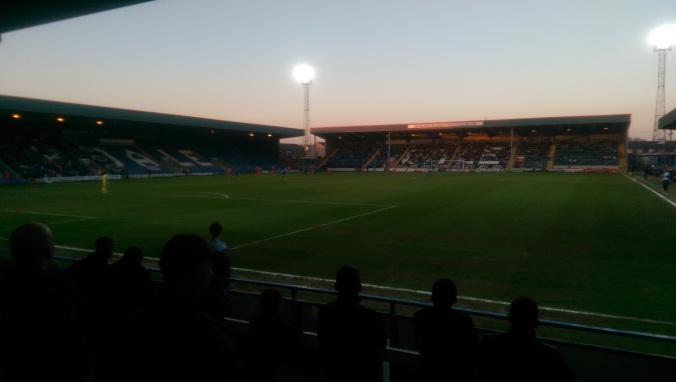 …I’m a sucker for a ground surrounded by houses.  That always makes a stadium proper to me; playing off my memories of going to Filbert Street as a kid.  Spotland is just like that, and it instantly makes me feel nostalgic.  We went into the Sandy Lane End, the terrace behind one goal.  The rest of the stadium is seated and to be fair, it may be small but it’s in good nick and still feels like it has a character, unlike so many nameless bowls around the place.  The game was just kicking off as we got in, and I got myself a meat and potato pie.  This is the only pie you should ever eat when in the North West.  I first had one at Blackburn years ago (they have to be Hollands ones) and I’ve been addicted ever since.  Although saying that, James clearly has been reading this blog in detail because he presumed I’d be annoyed at the lack of hot dogs.

As I got my pie, an older chap next to me asked if they were hot this week.  I said I didn’t know yet, but it felt it.  He proceeded to tell me that at the last game they were cold, but the game before that they were “nuclear”.  I like to think he has a chart on his wall at home, marking off pie temperature by game.  This being near the end of the season, it would now be pretty much filled in.

James noted the Rochdale keeper was Josh Lillis, who went to the same school as him.  I don’t have the joy of seeing footballers I went to school with playing the professional game, my school was much more into rugby (it produced Dead Richards, Graham Rowntree, Manu Tuilagi and many others).  although I do remember one lad having a trial with Notts County once, and we treated him like he was a god from that moment onwards.

Whilst I liked Spotland a lot, it did bother me a bit that the seats that spelled out “ROCHDALE” in the Willbutts Lane Stand weren’t quite centralised and symmetrical.  It’s tiny things like that which I’ll often spend far too much time worrying about, odd little man that I am.  The Orient fans took up one block, making some noise but still looking crushed from such a disappointing season  Last season they were brilliant and came so close to promotion, what a difference one year (and a change in ownership) makes.  I feel bad for them, they’re a cracking team and a good bunch of fans…

….I’ve been to Chesterfield to watch football before, a League Cup game at their old home Saltergate.  I think Leicester won 2-0.  All I remember is one really mouthy Spireite repeatedly walking over to the fence separating the fans and making a cut throat gesture whilst fans of both sides laughed at him (especially the Chesterfield fans who wore looks of “we have to put up with this prick all the time”).  At the end of the game he did it one final time, before running off and falling down some stairs.  When we were let off of our terrace we had to walk past him being loaded into an ambulance, where he was slightly less mouthy.

I remember Saltergate being a fun ground, if a bit run down even then.  The Proact Stadium opened in 2010 and is a tad bigger.  It certainly feels like a new stadium (as they always seem to), but the fans inside it try to make it a decent place to watch football.  It seems very breezy as well, with the open corners and the peak district not a million miles away.  It’s not as windswept as Barnsley used to be back in the day, but you can tell that you’re in Derbyshire if you were dropped there unknowing.

Like all new stadiums, you can’t just buy your ticket at the turnstile.  You have to go to the ticket office, get it, and then scan it through a barcode reader at the turnstile (yes, those AGAIN).  I queued up to get mine as a Norwegian man was getting his and asking about the best place to sit on his first visit to the ground.  Maybe he was the Scandinavian version of me, I didn’t ask.  He could well have been on stage in Oslo the night before and then driven over.  He still would have spent less time in his car on the Friday than I did….

Remember! From now on the only way to read on is to pick up my eBook. I’d be super grateful if you did!