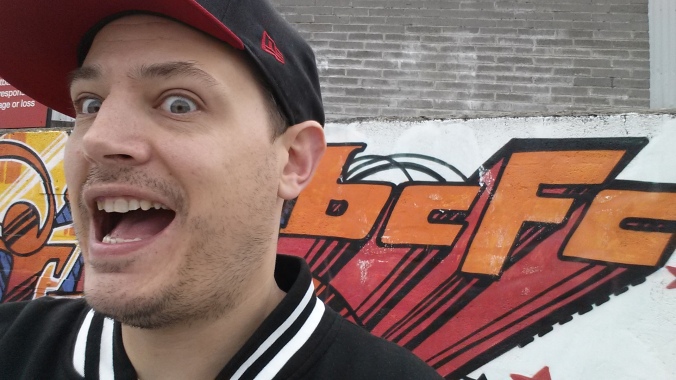 Look at this over-excited idiot.

…Miniscule Potential Problems For A Worrier

Ashton Gate is a proper stadium.  I know we don’t get standing at many grounds these days, but there’s something charming about Bristol City’s little ground.  Some fairly new stands, some corners that look like they should be condemned, each side a different height. I’m never one for those “bowl” type stadia.  Research told me that, in theory, there are two popular ends – fitting in with my rules of going where the noise and the fun is.  My decision was made for me though, as the small area (1200 seats or so) that are allocated to home fans in the Wedlock Stand – more affectionately known as the East End – had sold out upon my arrival.  Apparently this is where the “East End Ultras” congregate.

I have an issue with British fans using the term “Ultras”.  In Europe, Ultras are both massive in number and noise, with choreographed displays, enormous flags, flares and occasionally despicable political views.  In Britain this just seems to translate as “the small section of the crowd where we’ve got license to act like knobs”.

I certainly didn’t see any such behaviour from the City fans on Saturday from the East End, but equally they didn’t seem to be louder than the end where I ended up – the Atyeo Stand.  Buying a ticket there led to my first problem of the day.  As I queued up with the locals, I became incredibly aware that my accent is closer to Wolverhampton than Bristol, and also that I had no idea how to pronounce the name of the stand I wanted to sit in.  This caused genuine panic for several minutes.  Think about it.  How would you pronounce it?  I reasoned that AT – YE – OH was the best option.

Luckily, the woman in the ticket booth gently corrected me – it’s ATTY – OH – and immediately made my day by asking how old I was.  When I replied with the genuine answer – I’m 35 – she giggled and told me that I looked 21.  Maybe it’s the lack of sunlight in my life, maybe it was the baseball cap covering my male pattern baldness, maybe she had glaucoma.  She was nice, as was the woman who sold me a burger and the woman who sold me a pie, all ruddy cheeked 40 or 50 somethings with glorious west country accents and I imagine 3 or 4 well turned out kids each and a husband with a well stocked shed and a lot of tomato plants.

My panic over pronunciation led to me starting to fear other aspects of the game:  Would I stick out like a sore thumb and be somehow rumbled as an interloper by a cabal of City fans?  Even worse, could I check the Leicester score without looking like some kind of disheveled hooligan scout for a game that wasn’t even on the fixture list?…

Read the full article (and loads more) by downloading the ebook for less than £2. Features Britpop references and me shaking hands with Kenny Jackett! Click here to get it and support this project!