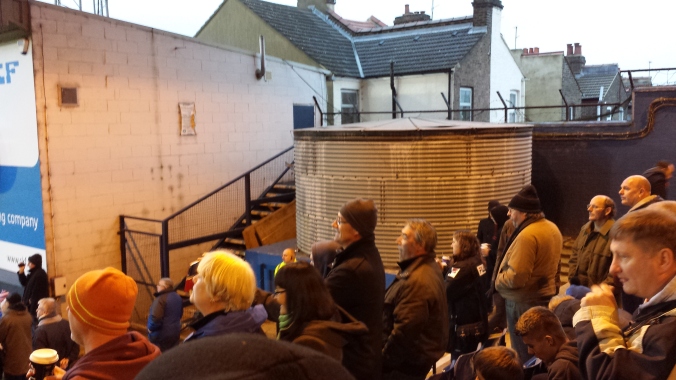 …Luton Town should not, under any circumstances, be as far down the football pyramid as they currently find themselves.  It must be a good ten years or so since I last visited Kenilworth Road, and I reckon it’s one of my most visited stadiums – albeit always from the away end before.

In fact the list goes Filbert Street, The King Power Stadium (those two are quite obvious), Selhurst Park (thanks to them hosting two teams during my most keen fandom in the mid to late nineties), Hillsborough and Kenilworth Road.  It’s great having such a terrible OCD problem when it comes to counting and making lists.

Of course, the reason that I’ve visited Luton so often is thanks to a large amount of second tier games between Luton and Leicester in my teens, plus a cup game here and there.  It used to be a decent hunting ground for us, although I don’t ever recall attending a game there that wasn’t accompanied by at the very least a steady drizzle, and at the very most a torrential downpour.  There seems to be a greyness that envelopes the entire town the second that I set foot within its borders.  Bolton is exactly the same, for reasons I cannot fathom.

Making my mind up where to visit this week came quite late on, a consequence of having my original weekend of gigs cancelled due to a club closure.  My excellent agent Sally managed to find me work in Newbury on the Friday night and Harlow on the Saturday, so I reasoned that I had a choice between Watford or Luton.  I chose the latter for the following reasons:

1:  Watford were playing Bolton.  I know I can watch the same away team more than once, but in the space of a few weeks it seems a bit too much.

2:  Vicarage Road is a few quid more expensive for a ticket, and as I won’t take free tickets on principle this hobby of mine isn’t cheap.

3:  The Hornets used karma to beat my side in the playoffs last season.  I’m not blaming them for that; if you remember the second leg of the Championship playoff semi final you’ll recall Leicester’s mercurial Gallic genius Anthony Knockaert diving in the area to win an injury time penalty, which he then missed… and they went straight up the other end and scored. Cheats never prosper (if wearing our shirt, anyway) and justice was, rightly and sadly, done.

4:  I quite fancied seeing if Kenilworth Road was as run down, old and strange as it used to be.  I used to love going there, in a weird way.  I remember using the loo in the away end and being able to see straight into the back yard of a house that backed onto the stadium….

This is just a little bit of the full report, which you can download as part of an ebook for less than £2.  Includes this match and 25 others, is over 300 pages long and I promise is a decent read! Click here to get it. Ta!