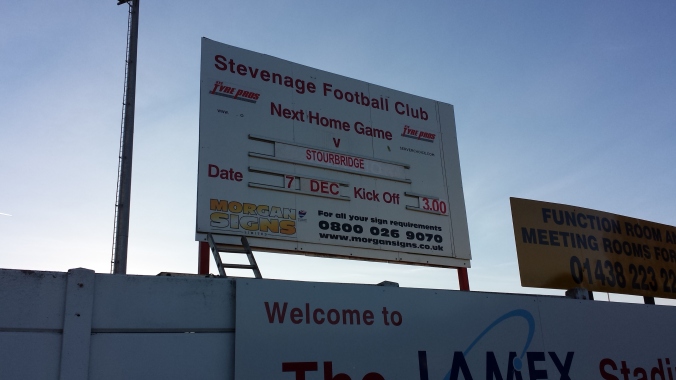 …Stourbridge occupied the South Stand directly opposite.  It was reported after the game that they’d taken nearly 900 fans with them to the game, even better when you consider that their average home attendance is less than half that.  They were incredibly loud and, it has to be said, pretty funny throughout the game.

As we kicked off, I could get a look at Stourbridge.  Now I knew that they were the lowest ranked club left in the FA Cup, but seeing them gave you a true impression of this.  Of course, no squad names or numbers.  But then you looked at their club sponsor and realised that they’re actually officially backed by a dental surgery.  One defender didn’t even have a sponsor on his shirt at all.  I’m presuming this is because they ran out of kit and iron-on logos, rather than a Papiss Cisse-like aversion to the ethics of the sponsor in question.

Stourbridge started strongest.  And I mean REALLY strong.  They played without fear and with the rocket up the arse that the FA Cup provides a smaller team.  They worked their socks off, chasing down everything and being first to every loose ball.  Up front Luke Benbow impressed, quick and powerful and with an eye for goal.  Veteran Stevenage keeper Chris Day had to be at his best to keep the non-league side at bay, and the Stourbridge fans grew louder with every chance.

The Stevenage fans were pretty quiet, but I’m not going to criticise here.  I’ve been to watch Leicester play much smaller sides in the cup and it is difficult to generate an atmosphere when winning is expected.  You get the feeling that Broadhall Way could be a much more lively venue if a bigger team was in town and driving the fans on to back their side; As it was, the Stourbridge fans supplied all the atmosphere – although at one point they were singing the Yaya / Kolo Toure song that I saw the Connah’s Quay fans singing a few weeks back.  Look, it’s funny but it’s not THAT funny….

Enjoy this little edited highlight?  Then please download the full match report along with 25 others and tons of other stuff for just £2 as part of my season review ebook on Kindle.  You’d really be helping me continue this project! Ta!