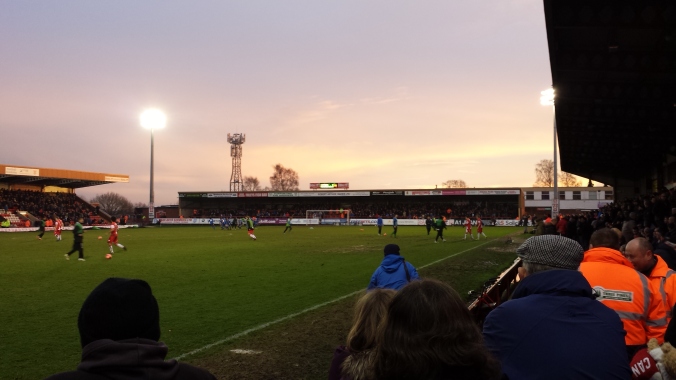 If I hadn’t have attended a third round FA Cup tie as my first match of 2014 then something would, of course, been incredibly wrong.  But with that said, the cup doesn’t have the same sheen on it as it used to – and with many a fan on phone-ins and message boards trying to figure out why attendances have dropped and the like, I think I can add my weight to these discussions.  I’m 13 stone, so brace yourselves.

I chose to go to Kidderminster vs Peterborough not just because it was on my way from Manchester (where I had been a guest on Fighting Talk) to Bristol, where my first (and thankfully non Christmassy) gig of the year was in the evening, but also because it had the air of a proper cup tie.  A non league team up against decent league opposition with the prospect of a shock hanging in the air, much better than choosing to see a couple of decent sized clubs put out their reserves after the busy festive season.

Aggborough was packed, but we’ll come to that in a while.  I’m writing this up later than normal, on Monday evening.  I have, since Saturday afternoon, watched several other games on TV and seen reports and highlights of others.  Stadiums half empty.  Youth players blooded because the league is more important.  Managers talking the competition down.

I can explain the first bit.  People seem to think that fans have been turned off of the FA Cup, but that’s nonsense.  Of course we haven’t.  You try telling the Wigan fans that the Cup wasn’t worth it last season.  Speaking as a Leicester City fan, I follow one of the biggest clubs to never win the FA Cup.  We took a fair few thousand fans to watch our game at Stoke on Saturday, even though we knew we’d put our reserves up against theirs.  I remember the last time we got to the quarter finals a fair few years back, and the anticipation of the tie against Blackburn was unbelievable.  Fans love the cup.  That really hasn’t changed.  We all want a day out at Wembley, even if it is overpriced and lacking the character of the old place with its horrible wooden benches….

If you fancy reading the full version of this match report (and 25 others) then please download my ebook on Kindle for less than £2. 300 pages of my adventures during 2013-14. Thanks!

One thought on “The Football Neutral: Match Seventeen – Kidderminster Harriers vs Peterborough United”