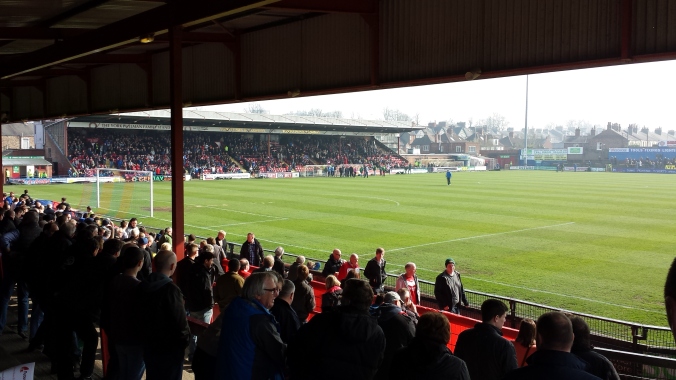 …Like most older stadiums, Bootham Crescent is surrounded by terraced housing.  In one of the tiny little front yards, a goth man stood gardening.  A proper goth.  Completely done up in full regalia.  Well, not quite full – I presume his full length leather trenchcoat was left inside as it was quite warm – but he was wearing makeup, his long hair dyed the blackest of blacks (for another sitcom reference, the black of a priest’s socks in Father Ted) and he was wearing long fishnet sleeves over a short sleeved black t-shirt.  We were agog.  I’ll be honest, seeing a goth in a supermarket is a weird enough experience; seeing one with a trowel in hand potting some plants is mind-bendingly weird.  Fair play to him though; he didn’t care that every single football supporter walking past noticed this rather odd sight.  He just got on doing what he was doing; I suspect trying to grow black roses or something like that.

Following on from the goth experience, we rounded a corner to head into the ground.  As we did so, we saw the fattest policeman that I have ever seen.  Honestly, he must have been at least 25 stone AND not exactly tall.  He was waving people across the road as he stopped a car, and I was surprised to not see him pull out a pasty to enjoy whilst he had a spare second.  He was the kind of chubby that made him resemble a cartoon character.  I am confident that even with dodgy knees, an irregular heartbeat and sciatica that I could outrun him in a pursuit.  He was so lardy that I reckon anything like that would immediately kill him.

As you walk to the turnstile for the David Longhurst Stand (named after the York striker who tragically died on the pitch in 1990) I noticed that most of the windows in the Main Stand look like badly built extensions; all jutted out and surrounded by red painted wood.  The turnstile we entered just says “ground” on it.  £17 and you’re in, and you can either stay stood on the Longhurst Terrace, or you can pay an extra £1 to sit in the Popular Stand.  And on this particular day, both stands were definitely popular.  The sun was out and the ground seemed pretty full to me…

If you enjoyed this tiniest of snippets of my day out in York, then please help support this project of mine by downloading my ebook which has the full versions of all 26 matches I attended last season and lots more. 300 pages for less than £2! Thanks!