BEFORE WE START! Remember to buy my Football Neutral 2013/14 Compilation Kindle Ebook. Less that £2 and genuinely good fun. Go here!

Pre Game: I only just switched the telly on in time to see the National Anthems.  Based on the rain, is this game being played in Oldham?  I imagine conditions are what my late mother would have referred to as “muggy”.

The advert break has just reminded me that I’m watching this on ITV.  Oh good lord.

Mexico manager Miguel Herrera doesn’t look Mexican at all. He looks like he’s from Durham.  Also, my Sky Plus box mentions “evergreen” Samuel Eto’o in their programme description.  HE IS YOUNGER THAN ME, FOR CRYING OUT LOUD.

Right then, here we go.  Minute by minute observations from now on.

1: Commentators seemed to be concerned primarily about the weight of the Mexico players.  How odd.  Mexican fans are PROPERLY loud, and at least one has been seen wearing a luchadore mask.  And it is still pissing down.

3: Benoit Assou-Ekotto is playing.  Notorious for turning up to his games in London on the tube, I imagine he isn’t using public transport in Brazil.  Mainly because the press here would have us believe that it’s on fire.

6: If you’ve got the Panini sticker album, have you noticed how leathery some of the Mexican lads are? At least one of them must be 60 years old.

7: With all of the rain, Assou Ekotto’s hair currently weighs more than Carlos Vela.  On a side note, why isn’t he here? If he’s as good as Arsene Wenger thinks he is, surely he should be?  Bad week for Arsenal fans.  Imagine reading that you’ve signed a player back from La Liga who you had a buyback clause concerning… then finding out is was Vela for £3.5m whilst turning down the chance at Fabregas. Madness.

10: “The looked shaky against Cape Verde” is surely a lost rap lyric that they wove into the commentary.

12: DISALLOWED GOAL – DOS SANTOS. Never offside. Commentators now regretting talking Cameroon up and Mexico down because at present the former look useless and the latter look a lot more eager.

15: Mexican boss suspended as a player for punching a photographer?  I presume he was taking a snap of him. Otherwise that’s just weird. Twatting people whilst they take pictures of landmarks.

16: DISALLOWED GOAL – CAMEROON. I was closer to the defensive line at the point the ball was played.

17: Sam Matterface is commentating.  Once I was a guest via phone on TalkSport and he publicly rubbished professional wrestling.  When he’s back from Brazil we should send him to a training session or two to see how he feels.  This is a genuine suggestion…. hmmm.

19: Trying to work out if the stadium is actually full, or if they’ve done what they did at that stadium in Portugal for the Euros a while back and painted the seats all different colours.

22: Good chance for Eto’o there. Thought the keeper saved it, but he hit the post.  Remember when he was the best player on Pro Evo by a mile? Usain Bolt levels of pace.

23: The Mexico socks look like part of a Jyushin “Thunder” Lyger costume. See? 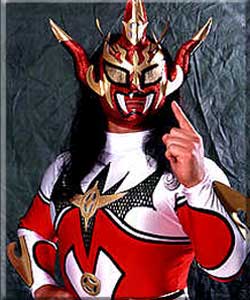 24: Mexico are playing like a team where they’ve all just gone “fucking hell! We forgot to practice defending corners!”

27: Up the other end, Rafa Marquez doing the defending for Cameroon there with a beautiful header. Mexican fans still utterly brilliant.  Surely there are more than 10,000 in the stadium?

29: In Manaus, a groundsman is waiting for this rain to turn up.

29: GOAL DISALLOWED – DOS SANTOS. That’s not offside either, Dos Santos off but the ball nodded through by a Cameroon lad.  Referee looking panicked.  At least this one doesn’t have to worry about Stipe Pletikosa helping the result along as well.

33: I can only presume that Dos Santos isn’t having these goals allowed as punishment for never being as good in real life as he was on Football Manager.

34: Am surprised the advertising hoardings around the side of the pitch aren’t the usual massive sponsors.  Keep seeing regional ones rather than… no, wait. All Adidas now. And someone in the stadium is getting fired.

36: I can’t hear the name “Vasquez” without thinking of the film Aliens.

39: Ref clueless. That was a red for M’Bia. Proper elbow.

43: Not that I’m bored, but the actress that played PFC Jenette Vasquez in Aliens was called Jenette Goldstein. She doesn’t act anymore, but instead runs a bra shop called “Jenette Bras”. Their catchphrase is “the alphabet starts at “D””. Brilliant.

44: Based on last night, that challenge on Dos Santos was a penalty, sending off and possible hanging.

45: Dear Mexico. If you have a dangerous header on goal, the linesman will be raising his flag. Ok? Thanks. Bye!

Thoughts so far: It is wet. Cameroon are properly rubbish.  Mexico are better than we’d expected, and let’s be honest, Dos Santos is playing like a man promised a Harry Redknapp signing on fee.

Franz Beckenbauer banned from all FIFA activity for 90 days, apparently.  So no bribes for him!  Well, not for ninety days.  He’ll have to find an other way to fuel his massive mansion until then.

Fabio Cannavaro is the worst pundit since… actually, fuck it.  There are a LOT of bad pundits.

The blonde Aussie lad in the Fosters advert is far too in shape to advertise lager.

45: If Cameroon have been playing with 6 at the back against Mexico, what will happen when they play Brazil?

46: My most pressing thought right now is when to order my kebab. If it arrives too early I can’t type. AND I AM SO HUNGRY RIGHT NOW.

47: Oribe Peralta should have scored. Anyone remember Sixto Peralta, on loan at Ipswich years back? Still playing, apparently. Also, Argentinian, not Mexican.

50: That was the world’s shittest two footed lunge. Come on, Alex Song. Commit properly to cheating!

53: Layun is wearing the new Puma mismatched boots. I know it’s meant to be cool, but it makes you look like you’ve got different sized feet and couldn’t buy a matching pair.

55: Dear Alex Song. You can’t even fake an injury right.  Also, I miss your blonde hair.

57: Now M’Bia is flailing around like a knob. Why? You’re big, muscular lads. We can tell by your shirts that seem to have shrunk in the thundery rain.

58: If the ref uses that defensive wall spray to just once spray “El Barto” on something then I’ll be happy. Or nWo on the World Cup trophy.

61: GOAL! MEXICO! PERALTA! About bloody time.  Itandje saves from Dos Santos, ball breaks to Peralta, 1-0.  Well deserved.  Crowd shots show one man wearing a luchadore mask AND a sombrero, ticking as many stereotypes as he could.  Everyone already loves the Mexican coach Miguel Herrera based on his celebrations.  He’s like a Sunday league Dad.

63: Hector Herrera fluffs a chance because he presumes the linesman was about to flag.

66: Samuel Eto’o caught having to commit to lying about being fouled there, and the game is held up for a minute or so. Nowt wrong with the lad, obviously.

67: Just given the goal line technology replay.  It’s fine lads.  We’re certain about that one. We saw the net move, that’s usually a giveaway.

73: Javier Hernandez is coming on. He last played a full game when he was 8 years old. That might be a lie.

74: Hernandez wants to be a staring striker.  Well then mate, be less shite.

75: Lots of Johnson’s Baby adverts around the side of the pitch. Not sure if Joe Hart is their spokesman yet, but I’m sure he will be soon.  To butcher a phrase, that lad would happily be paid to try and sell snow to the Eskimos.

76: Of course, a reminder: Tonight Chile vs Australia. THE BATTLE OF THE NON FRENCH OR ITALIAN WINE PRODUCING NATIONS!

77: Wall spray out again. The ref needs to paint the shape of a body around the next player who fakes an injury, just to entertain me.

79: Pierre Webo is an “old fashioned striker”.  By that they mean “doesn’t score many goals in an Emile Heskey goal return way”.

82: Kebab has arrived. Early. Keyboard will get greasy.

83: The Cameroon boss is the most miserable man I’ve ever seen in my life. He looks like a zombie that has been put on a brains ban.

90+1: Great saved from Ochoa. Apparently he was selected for being the most acrobatic keeper.  The others couldn’t do a forward roll or cartwheel, one would presume.

90+3: Hernandez misses from point blank range. Doesn’t even get it close with bags of time.  Peralta, now on the bench, laughs to himself and strokes his voodoo doll of Chicarito.

Cameroon look nothing like their exciting sides they always seemed to have in the 1990s, just nothing interesting about them at all – so lucky this is an ITV game and it’ll be the deadpan of Hoddle, Viera and Cannavaro dissecting the match.

Mexico are pretty exciting though – they probably don’t have a ton of pressure on them and their manager is easily going to be one of the highlights of the entire tournament.  Good value for their win, but they’ll be out in the first knockout round as usual.