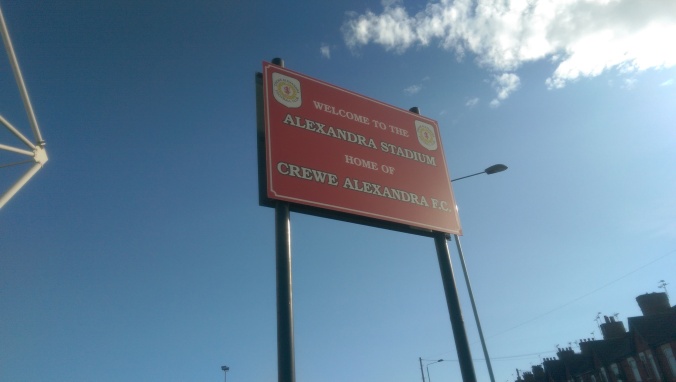 …Once in Crewe I was surprised that I seemed to be the only person on the train heading to the football.  Gresty Road really is easy to find; come out of the station, head left and take your second left.  I already knew this, but two different policemen in the station politely asked me if I was heading to the game and gave me directions.  I have no idea how they knew I was likely to be watching the match, as I was wearing nothing to give it away and they didn’t ask any other passengers.  They’re both tremendously polite and incredibly perceptive.

You walk past the away end that has its own ticket office. It is the whole side of the ground rather than an end, and is named wonderfully.  A few years back I went to Gresty Road with my Dad to watch City play there on the last day of the season (I think) and we noticed that the game that day was sponsored by the same company that now sponsor this stand: Whitby Morrison Ice Cream Vans.  On that day and this Saturday, I asked myself the same questions:

1: There is a company that just makes ice cream vans?

2: How much demand is there for ice cream vans?

3: Who is going to watch Crewe Alexandra and thinking “hang on a minute, I might buy an ice cream van. Thank god they sponsor that stand as it jogged my memory!”

I popped into the home ticket office to get mine sorted out – twenty two quid, same price for any part of the ground – and headed into the massive main stand.  And it is HUGE compared to the rest of the ground.  I seemed to remember Gresty Road being bigger back in the day, but it might be because it was fuller then.  It holds just over 10000 fans now, with the main stand taking up nearly 70 per cent of the seats.  Crewe thankfully still have turnstile operators – I loathe those barcode readers – and I climbed the stairs up to my seat.  I’d been given a seat number, but was told I could sit anywhere that was free.  I sat in an aisle seat just as the game kicked off, with Crewe in red and Scunthorpe in an unfamiliar green…