…When you’re used to travelling to games on your own, it’s really enjoyable to head off to a match with a couple of mates.  Our journey from Nottingham to Mansfield didn’t take too long as it’s just a few miles north.  The car was filled with talk of comedy – The Noise Next Door had a great Edinburgh and are on tour soon – and at one point we spotted a tent at the side of the road, pitched as if someone is living in it on a permanent basis.  I was very tempted to stop and have a look, but what do you say if someone is actually in there?  It’s a weird way to start a conversation.

Once in Mansfield we parked up and walked along to Field Mill (now renamed as the One Call Stadium) and had a little wander around the outside.  As we walked down the street that we’d parked on, Tom managed to find a discarded blade of some sort on the floor and we speculated how it got there – obviously the answer won’t be as fantastical as the suggestions that we came up with.  The away end at Field Mill sticks out into a retail park that has my ideal day out with my daughter summed up in two shops:  Maplins for me (I like looking at electronics and making plans for projects that I will never construct) with Pets at Home next door (so my daughter can go and look at fish and hamsters).  Underneath the far side of that end was a mattress, suggesting that someone lives there on a semi-permanent basis.  If we’d have known, we could have stole him a tent.  Whoever it belonged to had popped out for the day, a good idea as the Burton fans (who were superb throughout) would have kept him awake with their noise if he fancied a nap.

If you’re a comedian, you pride yourself on knowing every single comedy club in the country.  Well at Mansfield, the three of us discovered a new one:  The excellently named “Hoofers” that has nights within Field Mill.  However, they are paying the Peter Kay IMPERSONATOR (yes, that’s right: A man who DOES ANOTHER MAN’S ACT) Lee Lard to perform there this festive season. 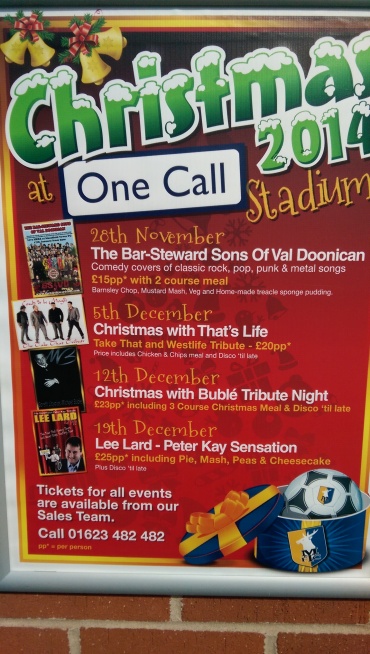 At least you get cheesecake, I suppose. But he’s more expensive than a Michael Buble tribute with a three course dinner! And it’s not like you won’t know all of his jokes! Madness…

One thought on “The Football Neutral: Match Thirty – Mansfield Town vs Burton Albion”